What do you absolutely have to discover in the eco-rhythm? - artykul - VisitMalopolska

What do you absolutely have to discover in the eco-rhythm? 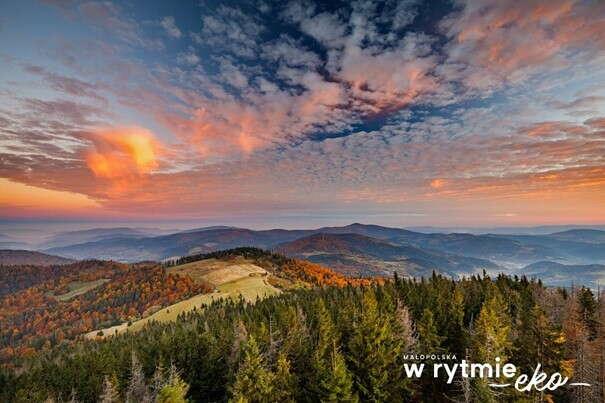 How many corners are there that you would love to see, but keep putting it off? How many times do you pass interesting places, promising yourself that next time you will stop and finally visit them, but never do? How often do you want to go on a weekend trip, but give up the idea for fear of crowds and excessive traffic? Be sure to make the most of autumn and visit exciting places away from the main tourist routes. Don't postpone your travel dreams, and we'll tell you what you must see this autumn!

Extraordinary places can be found in every part of Małopolska (Lesser Poland); however, their location off the main routes is often overlooked when planning trips and hikes. The sunny days of an Indian summer are the perfect time to find such unusual destinations on the map and discover their unique charm. All the more so because they define the true character of the region, uphold its traditions, develop its culture, and make it possible to get to know the authentic face of Małopolska.

For example, how many times have you been to Niepołomice? And have you ever visited the Royal Castle? If so, great. If not, you need to catch up! The first brick building was erected here by Casimir the Great. The Castle served subsequent Polish kings as a residence for hunting trips in Niepołomice Primeval Forest. Today, in place of the Gothic Casimir Castle, you can admire a beautiful Renaissance building. The square-plan building was constructed during the reign of Sigismund Augustus. The residence was modelled on Wawel Castle, where the Renaissance courtyard leads to its interior, and arcaded galleries surround the courtyard. A visit to the Niepołomice Museum is a great way to spend an afternoon, especially since you can combine sightseeing with a walk through the forest paths of nearby Niepołomice Forest. 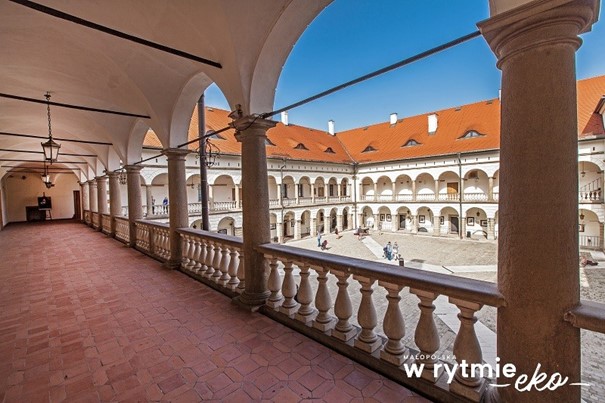 Not far from Krakow, there is also the Kmita and Lubomirski Castle in Wiśnicz. The mysterious fortified Castle situated on a wooded hill overlooking the Leksandrówka River was a defensive residence of the families of great Polish magnates. Today, it is looked after by the Museum of the Wiśnicz Land. During a guided tour around the Castle, you will see the beautiful inner courtyard with galleries, a chapel, halls and chambers with valuable furnishings. A visit to the Castle must be combined with a trip to the Wiślickie Foothills, and the local landscape park, where the hills are covered with meadows and pastures separated by thickets, and mid-field trees, marshy areas and peat bogs are full of valuable species of flora and fauna. 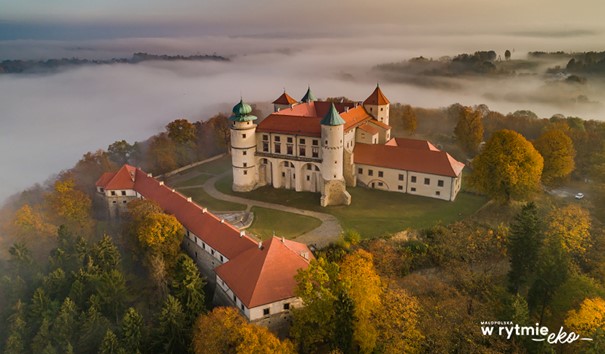 If you choose the Tarnów region as your destination, it is worth going to Powiśle Dąbrowskie to visit Malowane Zalipie, one of the most famous villages in Poland. That is all thanks to the tradition of decorating houses and their interiors, which probably dates to the 18th century. Colourful flowers decorate the outside walls of houses and farm buildings, their interiors, and even everyday objects. The most famous propagator of Zalipie folk art was Felicja Curyło (1903-1974). The house of the folk artist, Felicja Curyłowa's Homestead, is today part of the District Museum in Tarnów and a must-see for visitors to Zalipie. A bicycle will do just fine as a means of transport, as the painted houses are scattered throughout the village. 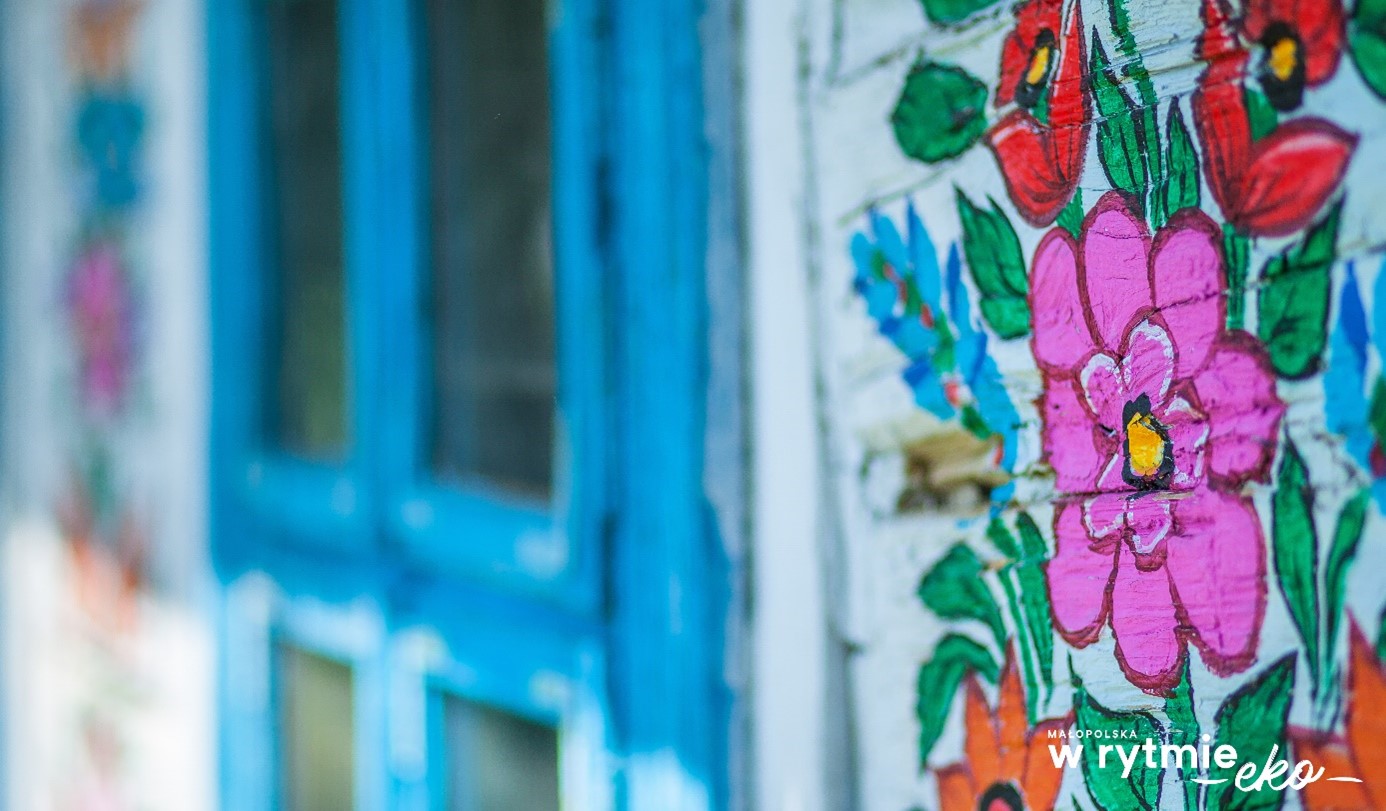 In the Dunajec Valley, among hills with a beautiful view of the river, another tourist gem, Czchów, with a fortified castle, guarded the nearby trade route leading to Hungary. Beautifully renovated, seen from afar, it attracts attention with its round tower, open to visitors in the season. Local trumpeters play a bugle call from the tower at noon. It would be best if you also visited the market square of Czchów, which was founded in the Middle Ages. This Galician town has retained its 14th-century urban layout and brick buildings in the Market Square, with characteristic wooden arcades supported by pillars. 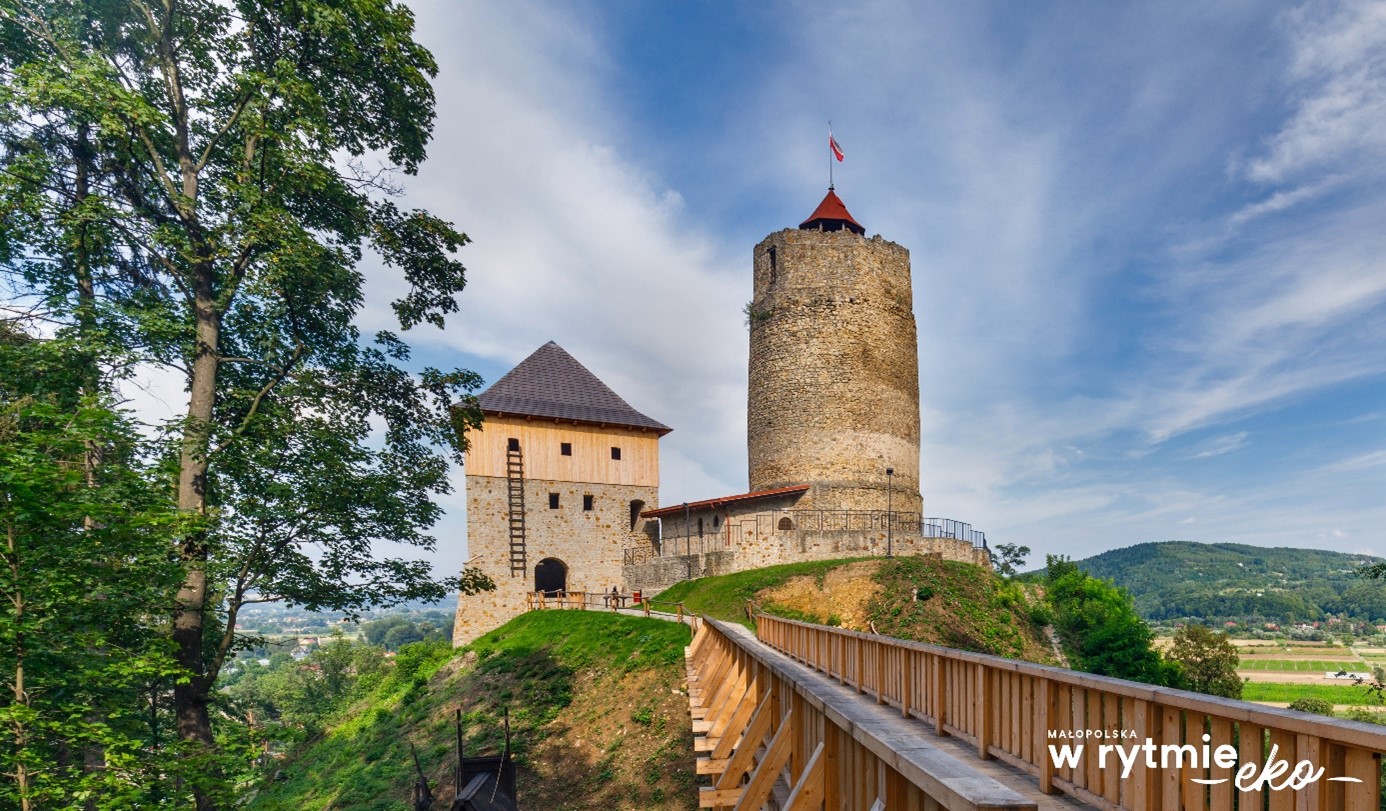 The beginning of autumn, a time when nature undergoes a natural metamorphosis and slowly prepares for its autumn sleep, is a great moment to set off on a trip along the Babia Góra National Park trails. The highest peak of Mount Babia - Diablak - can be reached by several trails. The most popular is the red trail from the Krowiarki Pass through the peaks of Sokolica (1367 m), Kępa (1521 m), Gówniak (1617 m) to finally reach Diablak (1725 m). The loop can then be closed by hiking the red trail to the PTTK Markowe Szczawiny Mountain Hostel and along the blue trail leading along the Upper Płaj through the forest back to the Krowiarki Pass. A great experience will be a spectacular sunrise on Mount Babia. A night hike awaits, which will be rewarded by an extraordinary spectacle of nature with autumn mists in the lead role and breath-taking views in all directions, especially of the Tatra Mountains glittering in the sun.

The autumn nature will also surprise you more than once during a cycling trip around Lake Czorsztyńskie. Deviating slightly from this picturesque cycling route, we can visit many interesting places. The Castle in Niedzica, located just above the dam, known for many film sets, including the famous Janosik, is worth visiting. On the other side of the lake, on a rock hanging about 50 m above the surface of the water, the Castle in Czorsztyn invites you with its mysterious view, shrouded in many legends and local tales.  While in the area, be sure to visit the unique wooden churches in Dębno, Harklowa and Trybsz. Those seeking local flavours will delight their taste buds with cheese and shepherd's delicacies straight from the shepherd's hut in the Majerz Glade. 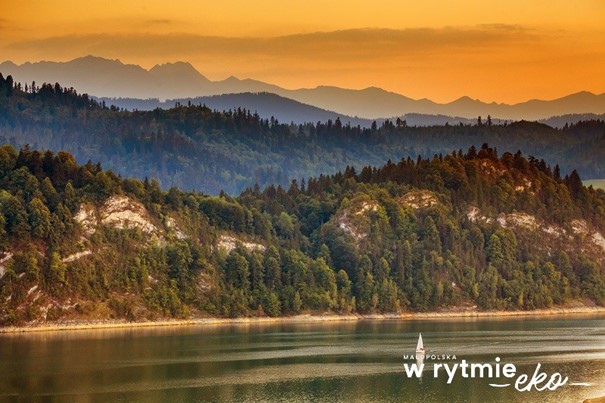 Have you ever visited the headquarters of Gorce National Park in Poręba Wielka, located in the historic park of the Wodzicki family established in the 18th century? It houses the Education Centre of Gorce National Park, with a multimedia exhibition on the nature and heritage of Gorce, and is accessible to people with different disabilities, including the blind and visually impaired. Interactive stations, soundtracks, multimedia applications, films, and vast panoramas allow contact with Gorce nature to be experienced and absorbed by all the senses. Here you can see and hear what is happening in the forest's heart, underground, in the air and water, and even under bark and inside a dead trunk. Bacówka's arrangement shows the shepherd culture of the Gorce mountain pastures and reveals the secrets of making oscypek. It is a fantastic attraction for big and small eco-tourists. 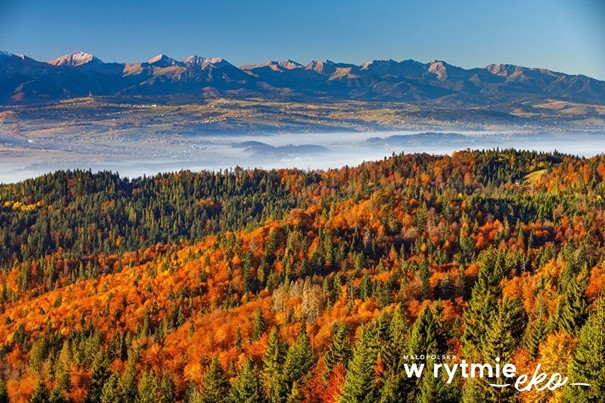 Explorers of wild nature will also like Bobrowisko in Stary Sącz. An unusual nature trail was created here in the fork of the Dunajec and Poprad rivers, presenting the natural and landscape wealth of ponds and riparian forests. These wet, dense forests may remind us of a tropical jungle. Only the trees and plants are different from the rainforest, and they consist mainly of willows, birches, alders and poplars. Amid the reeds, brambles and horsetails, unique species of fauna lead their daily lives here. Through the heart of Bobrowisko, we will be led by wooden platforms connecting two observation points - originally designed interactive buildings called chat rooms. Thanks to specially cut-out windows, and telescopes in the larger lookout room, we can observe, among other things, birds' nests and feeding grounds, as well as feeding grounds and dams created by industrious beavers. 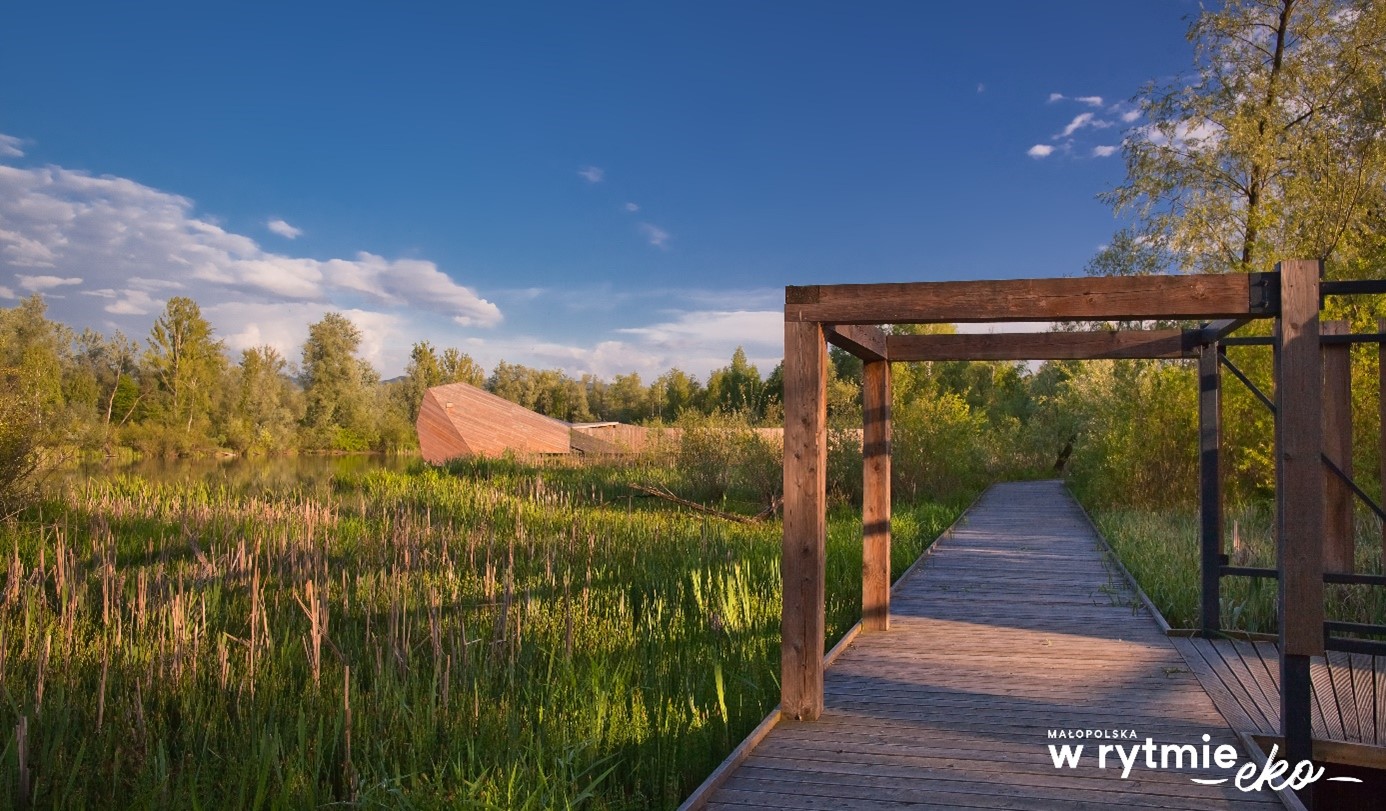 Perhaps you should head north after all... Among the Jurassic landscapes, limestone monadnocks and medieval strongholds lies Olkusz - the Silver City, which, besides Wieliczka and Bochnia, is one of the oldest centres of Polish mining. Visiting the Olkusz Old Town will be facilitated by the Silver Trail of Olkusz's miners, i.e. former miners. The circular educational and historical trail marked with 18 figures of miners is equipped with a multimedia application. More than 130 replicas of old coins placed in the pavement lead along the trail. The picturesque Olkusz Market Square is decorated with historic houses. On some of them, gmerkas, that is, old burgher coats of arms, have been preserved.  We can learn more about the history of Olkusz, Olkusz mining, and the region's heritage in the Antoni Minkiewicz Regional Museum PTTK, located in the Market Square in a historic tenement house from the 16th century. It is one of the oldest regional museums in Poland, established in 1911. You must also visit the underground tourist route -Podziemny Olkusz, the city's latest tourist attraction.

A trip to Olkusz can be combined with a visit to the Błędowska Desert - the largest area of volatile sands in Central Europe. The ’Polish Sahara’ stretches from Błędów (a district of Dąbrowa Górnicza) to Klucze. The sands were deposited here by melting glaciers 2-3 million years ago. Nowadays, the desert is overgrown with thermophilous vegetation and thickets of willows, pine trees and bearded birch.  As for rare plant species, you can find the stemless carline thistle, Cane's-foot trefoil and the Icelandic lungwort. It is a real treat for nature lovers! The Biała Przemsza Valley, which divides the Błędowska Desert into northern and southern parts, is the richest in species. It is an excellent destination for a hike amid relatively unremarkable landscapes. 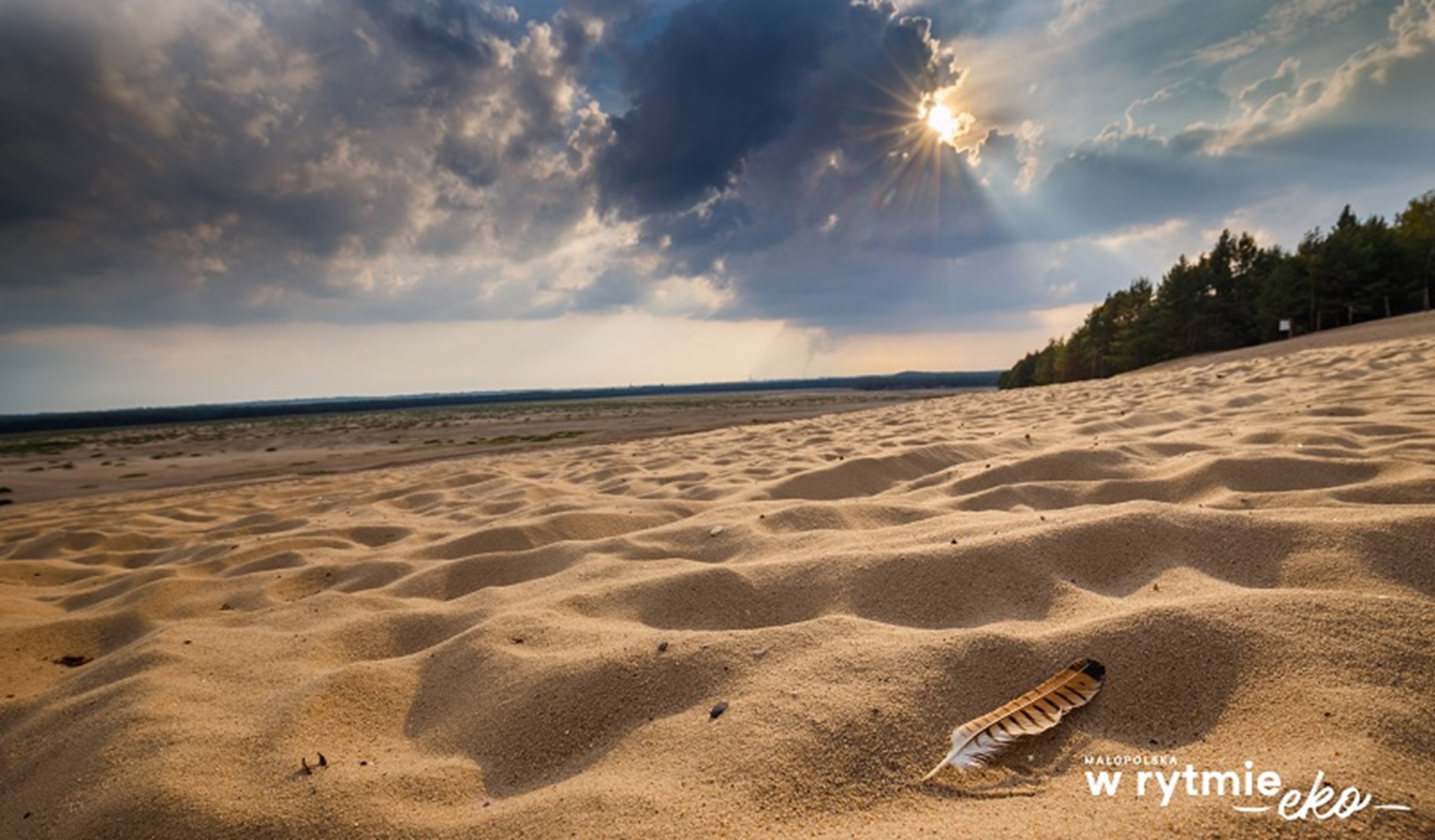 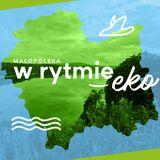 Małopolska in the eco rhythm!

See more Go to Article Małopolska in the eco rhythm!